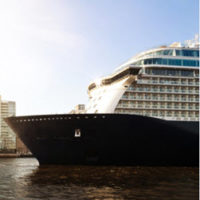 A Louisiana man says doctors had to amputate part of his thumb after his cruise ship crashed into a dock. The ship was operated by a Connecticut-based cruise line known as Guilford (no relation). The ship disembarked from Portland, Oregon and was supposed to make its way to Clarkston, Washington. However, the plaintiff would suffer a severe disfigurement before the ship reached its destination, which he says caused him mental anguish.

According to the lawsuit, Victor Buchholz was leaving his cabin when the door suddenly swung shut on his thumb. Apparently, the ship had collided with the dock and, among other reasons, this caused the door to violently swing shut and cause enough damage to require doctors to amputate part of it.

In addition to the dock collision, Buchholz maintains that the door was in ill-repair and defectively maintained or installed. According to Buchholz, there was insufficient resistance to prevent the door from violently swinging shut. Had the door been installed with a proper dampener, Buchholz would still have his thumb.

This Has Happened Before

Our firm has handled several cases like this, where balcony doors or the doors leading out to the deck are not properly dampened and the wind blows them closed with frightening speed and force.

In a lawsuit like this, the plaintiff must be able to show that the accident was avoidable and that the cruise line created an unreasonable risk of danger to their passengers. It also helps to show that there is an extant technology that could have prevented the accident. In this case, all three elements are satisfied. Doors can be installed with dampeners and it would be plainly obvious to any jury that heard the case that, had that technology been present, the plaintiff would still have a thumb.

In a case like this, the lawsuit would be filed on the same theory as a premises liability suit. That means the plaintiff is required to prove negligence and that they must show that the event was foreseeable by the owner. In other words, the plaintiff must prove that the defendant either knew or should have known that the dangerous condition was present and that it was likely to cause injury.

Swinging doors can not only injure thumbs but hands, arms and faces.  Children, because of their small stature and strength are most at risk. Installing and maintaining door dampeners that allow the door slowly to close seems logical and a simple means of protecting the ship’s passengers.

Talk to an Admiralty and Maritime Lawyer Today

If you’ve been injured on a cruise ship, you need an attorney who understands the litigation process when injuries happen on the high seas. Miami admiralty and maritime attorney Michael F. Guilford has litigated numerous such cases and can secure you a quality settlement or jury verdict.