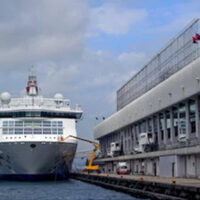 The CDC estimates that there are nearly 80,000 cruise ship crew members that have been left stranded aboard approximately 100 cruise ships. Thus far, rescue efforts have focused on getting passengers off the ships, but the crew members remain largely forgotten.

Meanwhile, the crew members remain quarantined on board.  Some ships are along side in port and others are just sitting at anchorage far from shore.  Some crew members are still working, while others are just waiting for their home countries to take them back. Several countries around the world have closed their borders, even to their own people.

What Happens to Crew Members Who Fall Ill?

Cruise ships were one of the original vectors for the coronavirus with several passengers and crew members falling ill with the virus. Some of these individuals were sent to self-quarantine in tiny cabins aboard the cruise ship, others were allowed to go about their duties, having close contact with both passengers and other crew members.

One such crew member Alexandra Nedeltcheva of Bulgaria told reporters that she lived in “constant fear of dying” and considered jumping ship. She has spent several weeks aboard the Celebrity Apex which was due to depart from a French port of call in the spring. She is also one of hundreds of crew members who ended up testing positive for the virus.

She further accuses Celebrity Cruises of releasing her four days early from quarantine and sending her back to her native Bulgaria where she had to rent an Airbnb to continue self quarantining.

The State of the Cruise Industry

The virus has hit the cruise industry hard. Most of the major cruise lines  are facing passenger lawsuits related to the coronavirus. Although most of the major cruise lines are based in the United States, they incorporated in foreign countries and their ships fly foreign flags.  The reason for this is that it allows the cruise lines to avoid having to comply with US safety rules, minimum wage rules and, most importantly, allows them to avoid paying US income taxes.  When the cruise lines publish numbers of workers, they fail to point out the vast majority of these workers are foreigners who do not live in the United States.  Therefore, when congress was enacting stimulus packages for the travel industry, cruise lines were not included, no taxes/no taxpayer relief dollars.

While the cruise industry enjoys vast protections from lawsuits, attorneys, like Michael Guilford, are hard at work finding ways to press forward with actions against the cruise lines for failing to safeguard both passengers and employees from the virus.

Suing a cruise line is not like suing a domestic company. You need an attorney who specializes in maritime law. Call Miami admiralty & maritime lawyer Michael F. Guilford today to schedule a free consultation.