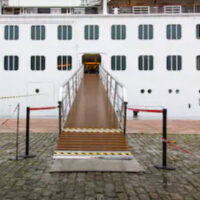 A Charlotte man is suing the owner of a boat from which he went overboard, according to a recent lawsuit filed in North Carolina. The injured party is a man and his two-year-old daughter. According to the man, he was pushing his daughter in a stroller along the gangway when the boat inexplicably began to pull away. As the boat pulled away, the gangway collapsed, and both he and his daughter ended up in the water.

The boat owner said that he is not to blame for the mishap.

It’s not uncommon for a defendant in a civil suit to deny liability, even when the basic elements of negligence are established. It forces the plaintiff into the position of preparing their case and proving their case. In this instance, however, it’s hard to see how the tour boat company isn’t responsible for the event that led to two of their passengers being thrown overboard. The company simply failed to secure the boat to the dock properly. They could have easily been killed. As the boat moved away from the gangway, the pilot attempted to turn it back, slamming it into the concrete dock. Had the overboard passengers been caught between the boat and the dock, they would have been crushed like bugs.

The father who was injured suffered several broken bones as a result of the accident. The injuries suffered by his daughter are unspecified.

The tour boat company has provided a red herring defense. Essentially, they are blaming a passing speed boat for causing the boat to move away from the gangway. According to the boat company, a speeding boat caused a wake that forced the tour boat away from the doctor leading to the mishap. Unfortunately, this explanation doesn’t provide a good reason why the boat wasn’t properly docked before taking passengers. But for the fact that the boat was not properly docked, the speeding boat’s wake doesn’t cause enough turbulence to land two passengers in the water. Since the situation could have been avoided by properly docking the boat, the tour boat company is responsible. Bringing a third party into the squabble does not relieve them of their responsibility to ensure that the boat is properly docked before taking passengers.

While their insurer will no doubt attempt to find the boat that caused the wake because involving them might reduce their own liability, there is very little reason to believe that the boat was properly docked while it was taking on passengers. If the accident was unavoidable, for instance, if the boat crashed into the tour boat, then that would be a different story. However, a properly docked boat should not pull away while passengers are boarding it regardless of other factors, even the wake of a passing speed boat, which plays the part of a red herring, distracting your attention from the obvious failure of the crew to dock the boat properly before boarding.

If you’ve suffered an injury at sea, call the Miami admiralty & maritime lawyers at Michael F. Guilford today to schedule a free consultation and begin discussing the details of the events surrounding your injury.