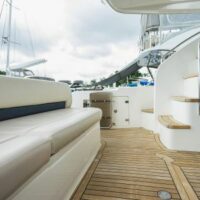 A man was injured aboard a cruise ship after he sat on a coach. Yes, you heard that right. The couch collapsed underneath him causing spinal injuries, and an attorney for the plaintiff announced that he had secured a multi-million dollar settlement for his client. According to the attorney, the man suffered significant spinal cord damage as a result of the couch collapse.

The plaintiff, who owned a casino in Vegas, was repeatedly invited by the cruise line to participate in high-stakes gambling. According to the lawsuit, the 300-pound plaintiff sat on a couch that immediately collapsed underneath him. He suffered shocking spinal injuries and endured considerable pain and suffering. While it may sound like a bit from the Three Stooges, this plaintiff was not laughing over the extent of the injuries he suffered.

An attorney for the plaintiff was able to establish that the sofas were at least 18 years old and had been rebuilt several times. There were numerous sofas that had identical problems with the frames and the cruise line either knew or should have known that the couch posed a potential danger to guests. There was some indication that the couch had previously been fixed but an employee erred when he attempted to put it back together. The use of residential (as opposed to commercial) furniture was also cited as a key issue in the lawsuit. After the guest destroyed his back and the couch, the cruise line put the couch back together again and placed it back into service.

The defendants maintained that the plaintiff had a history of back problems and had undergone a recent surgery. They claimed that while the couch may have been a key trigger for his back problems, the damage was already there. While the man may have been overweight and a smoker, he did not have limited mobility until after the accident. The jury returned a verdict that the cruise line was 85% liable for the incident and the plaintiff was 15% liable for the incident. That means that the plaintiff will recover 85% of $2.2 million.

It is common for personal injury defendants to bring in pre-existing injuries to a lawsuit against their client. Even in a case like this, where the liability has to fall on the plaintiff for placing a dangerous couch into an area that would be used by customers, the defense was able to reduce the jury award by 15% thanks to compelling arguments related to pre-existing injuries. It wasn’t enough to defeat his claim entirely, because his claim was quite strong, but it was enough to reduce his award.

Injured aboard a cruise ship? You may be entitled to compensation for any injuries you suffer due to the negligence of a cruise ship owner and operator. Call the Miami admiralty & maritime lawyer at Michael F. Guilford today to schedule a free consultation and learn more about how we can help.