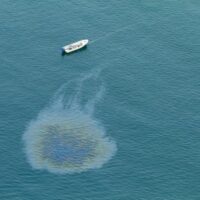 “I refuse to believe that corporations are people until Texas executes one!” I’ve heard people say this before. Corporations get executed all the time; one just recently. But it doesn’t look the same as when a person is executed.

Recently, Taylor Energy was “executed” by the U.S. government after its attorneys agreed to liquidate the entire company to reimburse the government for cleanup related to an ongoing oil spill, the largest in U.S. history. In fact, the pipeline is still sending oil into the Gulf of Mexico. Taylor Energy was required to pay the federal government half a billion dollars from a trust set aside to manage the spill. They were also forced to turn over all available remaining assets to the federal government to handle fines, cleanup, civil penalties, and whatever else. In other words, the company has been completely liquidated to repay the costs related to the spill. Effectively, Taylor Energy has been executed. So the next time someone tells you that a corporation is not a person because they cannot be executed, you’ll know that simply isn’t true.

Corporate executions: How do they work?

Taylor Energy isn’t the only corporation to be executed in this way, but corporate executions are much rarer than human executions. One of the most visible corporate executions involved the company Takata who manufactured dangerous airbags that went on to explode in the faces of customers. Takata was proven to have known about the issue prior to several of the fatalities (which are still occurring). They settled several wrongful death and personal injury lawsuits under seal and failed to report the defect to regulatory bodies. As a result, Takata was forced to settle the lawsuits for billions of dollars. Today, Takata exists primarily as a trust to pay out claims related to their exploding airbags. The company was effectively executed as a result of the malfeasance.

Offshore oil drilling companies operate under the threat of execution every time they create a pipeline. The U.S. government believes these things can be done safely when the proper protocols are followed and that accidents such as these only happen due to shortcuts, poor choices, and a failure of preparation. Companies that cause this contamination are responsible for paying for the cleanup and often this takes every last dime their company controls, as it did in Taylor Energy’s case.

If you’re concerned about the damage done to the Gulf, much of the cleanup efforts have been successful. Filtration systems have been able to remove the oil from the water, and continue to be effective against this type of spill.

Miami admiralty & maritime lawyer Michael F. Guilford represents the interests of longshoremen, maritime crew, and passengers aboard any type of craft. Call today to schedule a free consultation and discuss your situation in more detail.