5 of the Most Dangerous Maritime Jobs in America 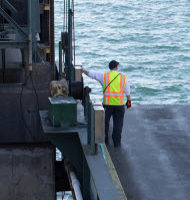 Fishermen have long been known to have one of the most dangerous jobs, and even with modern technology and high-tech communications, fishermen still face greater risks of injury or death than most American workers.  This has only been further highlighted by reality TV shows like The Deadliest Catch. But there are other jobs at sea that share many of the same risks, perhaps without all of the attention.

An unusual sounding job title and long hours distinguish this particularly dangerous job. As one foreign news report shows in graphic images, when ships are no longer seaworthy, they must be broken down and salvaged. This incredibly arduous and dangerous work is often done through manual labor.

While about 90 percent of the world’s ship breaking occurs in countries like India and Pakistan, the U.S. has a number of ports where ship breaking still occurs, including throughout southern Gulf Coastal states, like Florida, Texas and Louisiana.

According to Longshoreshippingnews.com, 6 out of the 10 most dangerous occupations in America are represented by Longshoremen working in some ports in California. This is not surprising, because Longshoremen perform transportation, construction, and maritime functions, often all within the same day. These highly versatile workers can earn over $100,000 per year, but the dangerous and constant physical risks certainly justify these salaries. Falling objects, head injuries, drownings, and amputations are common injuries.

“Roughnecks” or oil rig workers often work irregular hours, isolated away from friends and family for weeks or months on end. They operate in hot and humid conditions around highly combustible chemicals and heavy moving machinery, often on platforms or rigs that have limited avenues for escape in the event of a blowout, fire, or other type of major accident.

These risks are only elevated for workers who must be on offshore natural gas platforms or oil rigs. With nowhere to go and limited access to medical care, these isolated miniature cities on the water often pose incredible risks, especially when companies cut corners on safety to save money.

This catch-all term applies to various deckhands and dock workers who are responsible for helping move freight and other items on and off of ships in harbors, as well as those who serve as labor crew for freight ships.

While the Alaskan crab fishermen get all the glory in reality TV, the fact is that anyone who must live aboard a ship for weeks or months at a time, away from family and at the mercy of the sea, is going to be in danger. Weather and ocean conditions can take a toll on even the most resilient and seasoned seafarer. Unfortunately, these jobs claimed 504 lives between 2000 and 2009, according to reports by the Centers for Disease Control and Prevention (CDC). While the Alaskan region claimed the highest number, the Atlantic was a close second, and 23 percent of all deaths occurred in the Gulf of Mexico during the same period.

If you are injured on the job as an offshore oil rig worker, crew member of a commercial vessel, or in any maritime function, you may have different rights depending on your employer, your job title, the state you were in, or the distance from the shore at the time of the injury. Make sure to call an experienced admiralty attorney who can advise you on how to correctly fight for compensation.

Those who are seriously injured often face high medical bills and lost income. You owe it to yourself and your family to fight for the compensation you deserve. Michael F. Guilford, P.A. represents injured offshore workers throughout Florida. Call or visit the firm to schedule your private and confidential consultation today.