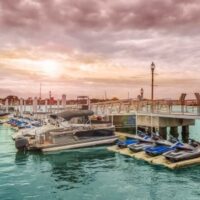 A federal judge recently ruled that a woman’s injury claim aboard a jetboat is indeed a maritime case after determining that the boat was sailing through navigable waters. Without boring you with the terminology, maritime law applies to navigable waters, not, for instance, waters that cannot be navigated. In this case, the woman raised the point that the waters were not navigable and hence maritime law should not apply. A judge ruled that the waters were navigable thus forcing the case through maritime court.

That begs the question: Why would the plaintiff want to get the case out of maritime court? Well, for anyone familiar with our blog, it’s largely because maritime jurisdiction is quite restrictive of personal injury or tort lawsuits.

According to the plaintiff, she was thrown from a jetboat and struck by another jetboat resulting in injury. There were three jet boats on the tour. The woman claims that they were engaging in horseplay and making rapid 360 degree turns on harsh waters. She sought to have the lawsuit removed from maritime court where her damages would be limited by maritime law. She failed because the judge ruled the waters she was on were “navigable” as opposed to “not navigable”.

As a result of the accident, the woman suffered brain injuries and head injuries including severe cuts to her scalp, a serious concussion, and a protracted period of concussion syndrome. In a case like this, the plaintiff is seeking damages in the amount of several million dollars. However, maritime law limits her liability to only $125,000—the value of the boat.

The woman and her attorney tried several different arguments to get the case placed into state court. This included saying that the stretch was non-navigable under both maritime law and environmental law placing protections over the area.

The argument didn’t work. That would mean that her total compensation for this accident is limited to $125,000. Until the law changes or is updated, the injured party will have no means of recovering more than that sum for this incident.

What is “Non-Navigable” Waters?

The courts have ruled that some waters are non-navigable under the law. Essentially, that would mean that maritime court was not the appropriate venue for a lawsuit. The lawsuit would move to state court where the plaintiff would have a much stronger claim and be able to recover much more in damages.

Well, the courts have ruled that some waters are non-navigable. This includes landlocked lakes. In one lawsuit, a plaintiff filed a case in federal court under maritime jurisdiction relating to a wrongful death. The judge dismissed the case from maritime court, which should have allowed the case to proceed to state court under the state’s tort guidelines. While state courts hear maritime lawsuits, a case like this would not have to be tried under maritime law.

Maritime jurisdiction is a complex concept under the law. If you’ve been injured on a boat, the Miami admiralty & maritime attorneys at the law office of Michael F. Guilford can help you sue the at-fault party and recover damages related to your medical expenses, lost wages, and more.