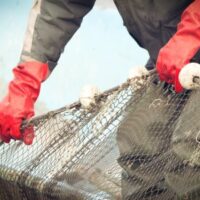 The families of two fishermen who lost their lives has spurred forth community efforts to raise awareness around the perils of fishing and offer safety and training programs to aspiring fishermen. The Seaworthy Foundation, is using the tragedies to ensure the legacies of the slain fishermen and prevent similar tragedies in the future. Among other things, the Seaworthy Foundation will offer lifejackets to fishermen, along with training, safety courses, and CPR.

Surprisingly, fishing is among the most dangerous jobs in the United States with a fatality rate 30 times that of the national average. Fishermen are four times more likely to die at work than those in other professions. This has inspired locals in the New Bedford community to work closely with OSHA to establish standards that could prevent future tragedies. This includes very basic preventative measures like wearing lifejackets, alongside other technical training that will help prevent the tragedies that cause death at sea. In New Bedford alone, more than 3 fishermen have died annually over the past hundred years.

You might be wondering, with all of those deaths, how many injuries occur each year? The answer is a lot. In fact, the issue is so prominent that as part of the training, the Seaworthy Foundation will offer training on the proper use of opioids as many fishermen are prescribed painkillers directly following a work-related injury. It isn’t surprising then, that some become addicted.

Additionally, the foundation seeks to establish minimum standards for equipment and ship safety that would be enforced by OSHA the same way it is for most shorebound workplaces.

Two fishermen phoned in a distress signal. One man was a 5-year veteran of the industry while the other was a rookie. The weather was not an issue that day. Nonetheless, the boat turned over in the water and two men were lost. The incident is still under investigation. The mysterious nature of the incident has many wondering whether or not the shipowners were negligent. Ships are certainly not designed to sink in beautiful weather, so determining a cause of the incident remains a top priority for investigators and the plaintiffs.

In any personal injury lawsuit, the defendant has the option of blaming the plaintiff for their injuries or death. In this case, if the company claims the men were incompetent to the task, then the plaintiffs can question why they were ordered out together without supervision from a veteran seaman. So the company is in a bit of a bind from an argumentation standpoint. The vessel must be seaworthy. The vessel sank. If the vessel sank because of the incompetence of the fishermen, then the company has a duty to ensure that they are properly trained. So, it’ll be hard to argue their way out of this one.