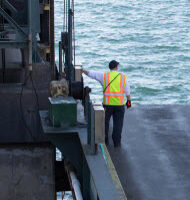 A lawsuit was recently filed under The Longshore Harbor’s Workers’ Compensation Act  (LHWCA) alleging that a longshoreman was injured due to dangerous conditions aboard the vessel. Under the LHWCA, a shipowner/charterer has a duty of care to turn over a safe vessel to those working at harbors. In this case, the worker fell off a walkway that spanned two container bays. The walkway did not have any rope/railings which created a hazard.

Why did the plaintiff lose this case?

Essentially, longshore work is considered a skilled trade. So longshoremen are experts at their trade. This means that they are held to a higher standard than the general public. In order to successfully win a lawsuit based on the shipowner/charterer’s failure to turn over a safe vessel, the dangerous condition would need known or should have been known by the shipowner/charterer and undiscoverable to the longshoreman. In this case, the danger was open and obvious, according to the court.

The court found that the longshoreman could have filled the first bay first, which would have reduced the size of the drop that caused his injury on the walkway. Further, by the use of his senses, the Longshoreman could have seen the walkway was dangerous because there was no rope/railings to prevent falls. So the fact that a skilled worker should have recognized the danger, filled the first bay to reduce the fall risk, meant the shipowner/charterer was not responsible for his injuries.

Now, if you’re a regular Joe who goes aboard a cruise vessel and there is a dangerous walkway with no rope/railings, you traverse this walkway and injure yourself, you may be entitled to file a claim against the vessel for failing to maintain the vessel in a safe condition. Longshoremen, however, are held to higher standards, and in this case, they would also have a separate remedy at their disposal, a form of workers’ compensation under the LHWCA . While lawsuits generally provide greater recovery than workers’ compensation claims, the fact that there is another remedy most likely weighed heavily in the decision against the longshoreman. Members of the public do not have another remedy and are not trained to identify risks.

If you’ve been injured as a longshoreman, crewmember, or passenger aboard a vessel, you may be entitled to recover damages. Call Miami admiralty & maritime lawyer Michael F. Guilford today and we can discuss your options immediately.