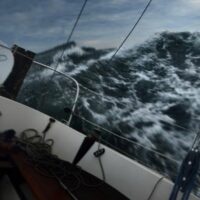 In August, a drillship was hit by Tropical Storm Ida sustaining some damage, limited flooding, and crew injuries. Nine crew members sustained “minor” injuries, but four of those crew members had to be medevaced to shore. Now, one crew member has filed a personal injury lawsuit under The Jones Act, claiming negligence on the part of his employer. According to the lawsuit, the ship was sailed directly into the path of the tropical storm and experienced winds as high as 150 mph. According to eyewitness reports, the ship nearly capsized several times. Crew were thrown about into walls and suffered various injuries. Some crewmembers expressed that they were “going to die”. Although none of them did, it’s clear that the decision to steer the ship directly into the storm created sinister conditions that injured and frightened the crew.

The plaintiff is filing his lawsuit on the basis that the ship’s captain made the bad decision to sail directly into the storm. The Jones Act allows seamen to hold their captain and decision-makers liable for exposing them to avoidable danger. Since they were exposed to avoidable danger, the plaintiff believes he is entitled to recover damages.

In terms of the allegations, they are complete for a strong cause of action. The plaintiff alleges that the captain and company had foreknowledge of the coming storm and decided to sail into it despite a weather advisory. This resulted in avoidable injuries to crew, severe damage to the ship, and a lot of money lost for the drilling company.

In cases where a random unforeseeable danger results in injury to a crew member, the company may be liable for the injury, but not negligent or responsible for the injury. Since only some claims can be filed under The Jones Act, the presence of a clear and obvious danger generally acts as proof of negligence. In this case you have a weather advisory, a tropical storm, and foreknowledge of both as the ship ceased operations when the storm warning was issued.

So, the plaintiff will be able to claim that the ship captain knew about the storm, reacted defensively to the impending storm by ceasing operations and heading back to port, but then also sailed his ship directly into the storm, increasing the danger to crew and the ship. Since the danger was foreseeable, it was also avoidable. Since the danger was avoidable, the ship and their captain and the company at large is responsible for the injuries to their crewmembers.

While we can plainly see the company’s negligence, the extent of the crewmember’s injuries will determine his compensation. Crewmembers can also sue for their emotional injuries, including negligent infliction of emotional distress. To win on that basis, the employee must establish that he was unreasonably exposed to danger due to employer negligence.

If you’ve been injured on the high seas, you can recover damages related to lost work, medical expenses, and pain and suffering. Call Miami admiralty & maritime lawyer Michael F. Guilford today to schedule a free consultation and learn more about how we can help.