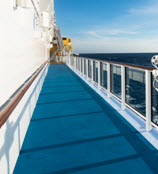 A 26-year-old crew member fell off The Vision of the Seas, a Royal Caribbean vessel. The crew member was performing maintenance work on the vessel. The crewman died as a result of the fall and his body was later discovered by divers. This is the 349th individual to fall overboard on a cruise vessel.

According to those familiar with the incident, the cruise line was not following “work aloft” procedures. Among other requirements, crew members are required to wear protective equipment which includes a safety harness. Why this individual crew member was not wearing a safety harness while maintaining the vessel will be a matter for investigation.

Each individual aboard the vessel is required to follow the ship’s safety management system (procedure manual), as well as IMO and other conventions and regulations. In this instance, his immediate supervisor should have required him to wear a harness, but we often find the safety equipment is not available, or supervisors cannot be troubled with taking the time that adhering to safe work practices takes. The cruise line should have also ensured that the crew member was adequately trained to perform the work being done.

Last year, another crew member died aboard The Victory when he was likewise not wearing a safety harness while performing work aloft. According to data collected from Cruise Junkie, this is the 349th person to fall overboard. The data includes both passengers and crew members.

Despite the clear negligence on the part of the cruise ship, the crew member who fell overboard was a Filipino citizen and serving under a POEA (Philippines Overseas Employment Act) agreement which strips seamen of there statutory and historic protections and heavily favors employers like Royal Carribean in legal matters. The POEA prohibits Filipino citizens from filing lawsuits in the U.S. and forces their families into arbitration. It also limits the maximum recovery for the family to $50,000 and $7,500 for each surviving child.

Many see the POEA as a direct violation of the International Labor Organization and a mockery of labor rights in the modern age. Filipino workers and their families are routinely injured, maimed, and killed aboard cruise vessels and get little to no compensation even when they can no longer perform their jobs.

The claims process is also a joke. An injured worker meets with one doctor who sets their disability rating, which in turn sets the limits on what the crew member can recover.  The doctor is selected and employed by the cruise line and therefore minimizes any injury/disability the crew member has.

Nonetheless,  because these Filipino workers are a large source of hard currency to the Philippines, the government supports such measures  regardless of the danger it presents to its citizens.

If you’ve been injured aboard a cruise ship or other vessel, talk to Miami admiralty & maritime lawyer Michael F. Guilford today. We handle maritime injury claims and have the expertise you need to file a successful claim.