River Cruise Ship Collides With Boat on the Danube; 28 Dead or Missing 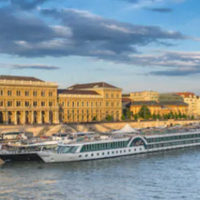 The Viking River Cruise ship, Sigyn, collided with a Hungarian sightseeing boat called the Hableany (Mermaid) on the Danube River. Both ships were headed northbound when the Hableany seemed to pull in front of the Sigyn. The Hableany was significantly smaller than the Viking Sigyn. When the Sigyn struck the Hableany, it caused the boat to turn over and it eventually sank. Seven aboard the ship were able to be rescued while another seven were confirmed dead. There are still 19 people who were neither confirmed dead nor rescued.

The Sigyn was specifically designed as a river ship and Viking has named it a longship. There has been some concern over the danger of putting a larger cruise ship on small bodies of water, such as the rivers and lakes of the Danube.

Generally speaking, those who go on river cruises generally do not get injured. But that is largely because the cruise ship is the largest boat on those waters. Meanwhile, other, smaller vessels are at risk for a number of reasons. It would also appear that while river cruise accidents remain relatively rare, there have been more of them since 2016 than in years past.

In 2016, the Viking Freya couldn’t clear a rail bridge which crushed the wheelhouse and killed two Hungarian officers. Another ship also struck a bridge in Germany resulting in various injuries to 30 passengers. Earlier this May another Viking river ship forgot to lower its wheelhouse and struck a bridge.

In April of 2019, there was a collision between a Viking river ship and a chemical tanker. Four passengers were injured. The incident involving the Sigyn and Hableany had much more tragic results, there may be as many as 28 deaths.

Hungarian authorities launched an official investigation to determine the cause of the river ship collision. After questioning the captain of the Viking Sigyn, a Ukrainian man, they moved to take him into custody. There is no word yet on whether or not the captain will be charged with any crime, but Hungarian authorities cited “reckless misconduct in waterborne traffic leading to mass casualties” as the official reason for the detention.

If Hungarian authorities do determine that the captain of the Sigyn was at fault, Viking could be responsible for paying damages for 28 wrongful deaths and 7 injury lawsuits.

This time of year, the river is cold and chances are high that the missing passengers did not survive.

Talk to a Maritime and Admiralty Lawyer

Miami admiralty and maritime attorney Michael F. Guilford focuses on lawsuits involving injuries that occur on the high seas. If you’ve been injured on a cruise ship, talk to us. We can help.