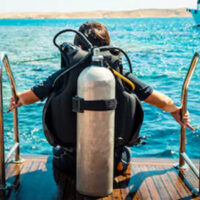 The owner of a scuba diving boat that sank off the California coast after bursting into flames has sold his two remaining boats, likely to satisfy the many wrongful death lawsuits that have been filed against his company. The boats were sold to another scuba diving company. Glen Fritzler, the owner of the boat that killed 34 people, said that neither he nor his family will be involved in the venture that now owns his boats. The company that purchased the boats said that they will inspect the boats and make the necessary improvements before boarding passengers.

The captain of the boat is facing 34 counts of negligent homicide or “seaman’s manslaughter” as it called when it happens at sea. The captain is accused of negligence, failing to properly train his crew, failing to conduct fire drills, and failing to have a night watchman watch over the boat when there were passengers aboard.

While federal authorities blamed the scuba company for the deaths, Fritzler has not personally faced any charges. He is, however, facing several wrongful death lawsuits relating to the deaths of his passengers.

It is unclear how many families will file wrongful death lawsuits against the company. However, wrongful deaths typically settle for at least $1 million. In a case like this, when several able-bodied adults die, those with dependents or spouses will be entitled to the prorated amount of their earnings. The money earned from divesting the boats will end up in a trust to pay off the wrongful death lawsuits filed by the passengers’ loved ones.

Initially, the company had sued to limit its liability concerning payments to family members who lost loved ones in the accident. However, the company has decided to pause that lawsuit and allow the wrongful death lawsuits to proceed. Afterward, it can be determined if the company’s liability will be limited under Maritime law. Maritime law can restrict the total payout made to injured plaintiffs to the total value of the boat. The matter will be decided once a ruling has been reached on the merit of the wrongful death lawsuits.

If you’ve been injured aboard a ship at sea, call the Miami admiralty & maritime attorneys at Michael F. Guilford today to schedule a free consultation and discuss the circumstances surrounding your injury in greater detail.