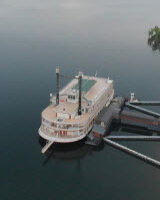 An “out of control” cruise ship recently collided with a riverboat. Uniworld Boutique River Cruise Collection is suing MSC cruises over an incident that occurred just outside of Venice, Italy. The incident was caught on tape, and you can clearly hear the MSC cruise line vessel’s horn blaring as it collided with the smaller vessel which was already docked. Now, Uniworld has filed at $13 million lawsuit against MSC in an attempt to recover damages related to the collision.

The MSC vessel was attempting to dock when a mechanical problem apparently threw the ship off course. Two towboats attempted to stop the ship from crashing into the dock, but they were unsuccessful.

Uniworld blames MSC’s “extremely unprofessional manner” for “forcing” them to file a lawsuit in order to recover damages. They maintain that they were forced to cancel 14 voyages during their peak summer season when they have the most guests.

In a case like this, Uniworld’s own insurance company might be forced to pick up the tab on any passenger claims that resulted from the accident, but would be reimbursed by MSC’s insurance company since it was their negligent repair work that resulted in the accident. Additionally, the damage to the ship would need to be compensated and Uniworld may be able to recover damages for revenue lost while their ship was down.

For Uniworld’s part, they were hoping to settle the case amicably without the need of courtrooms and attorneys. They made a statement saying that they don’t like to litigate but that circumstances now require it. They accuse MSC of delaying and operating in bad faith while they were trying to recoup damages related to the accident.

Just like a commercial trucking company that operates a large fleet of tractor-trailers, cruise companies are expected to ensure that their vessels are seaworthy prior to leaving for a voyage. When some mechanical issue happens, they are ultimately responsible for the problem that occurs. They can shift liability to a company that was contracted to make repairs on the vessel only if they can show that they had no reason to believe that the vessel would have a problem after the repairs were finished. In other words, they can make the whole thing another company’s problem, but if they can’t, then they’re responsible for the damage.

It seems unlikely that MSC will be able to wiggle their way out of this without making some form of compensation to Uniworld. They are facing a lawsuit that now seeks $13 million in damages for damage to their boat, passenger claims, and lost revenue while they were waiting for MSC to respond to their overtures.

If you need to file a passenger claim against a cruise ship for injuries you sustained aboard the vessel, talk to the Miami admiralty & maritime attorneys at the office of Michael F. Guilford. We will file a claim against the cruise line and recover damages related to your injuries. Schedule your free consultation today.