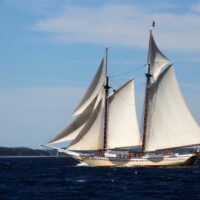 Passengers of a historic schooner built in 1906 have filed a lawsuit after the boat capsized while on tour, according to a recent lawsuit. The museum had moved to prevent lawsuits from being filed against it for the incident. Good Samaritans and first responders rescued the passengers and the boat was hauled back to shore without any fatality.

A plaintiff has nonetheless filed a lawsuit against the museum alleging gross negligence on the basis that the aged schooner was not seaworthy.

In a standard maritime case like the one discussed above, the company that owned the vessel would petition the court for bankruptcy-like protections that are automatically invoked when a personal injury lawsuit is filed. No matter how many lives are claimed aboard the vessel, the vessel owner can petition the court to reduce their liability to the value of the boat. In this case, the boat costs around $150,000 according to the museum. That means that the plaintiff would be limited to $150,000. His attorney has already suggested that his damages exceed that sum.

Allegations against the museum

The allegations against the museum are twofold. Firstly, they are being accused of not properly equipping the boat with safety equipment. Secondly, they are accused of not adequately training employees in the safe operation of the boat. The plaintiff contends that the boat capsized because the ship’s captain improperly operated the boat. The suit says passengers were shown where to access lifejackets but were not required to wear them. When the boat capsized, passengers plucked them out of the water where they were floating. The museum contests these claims. They say that the boat was seaworthy and properly equipped.

There are two things that went unsaid that will have more impact on the case than what was said. Firstly, the article does not discuss the plaintiff’s injuries. It is typical in lawsuits to discuss injuries and when injuries are not openly discussed, it’s generally because they were not significant. In this case, the plaintiff was probably stuck in the water for a couple of hours in fear of his life. Not a great feeling, but he likely won’t suffer permanent physical injury. Nonetheless, he probably had to be taken to the hospital where he received treatment. So, he can establish that there was some injury. But perhaps the psychiatric toll that the trauma took was greater than the physical scars left behind. This could limit his damages award.

Secondly, while the response says that the boat was properly equipped and seaworthy, it does not comment on the quality of the crew to operate the boat. In this case, the crew appears to have turned the sails directly into the wind, flattening the boat on the water and dumping the passengers overboard. So, that is probably where their liability lies.

If you’ve been injured due to the negligence of a boat owner or operator, you are entitled to recover damages for your injuries. Call Miami admiralty & maritime attorney Michael F. Guilford today to schedule a free consultation and discuss your situation in more detail.