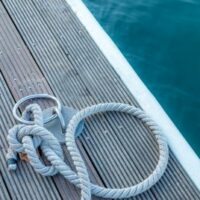 A recent lawsuit filed against a vessel alleged that a crewman was injured after following an order from the vessel’s captain. According to the suit, the crewman and another were tasked with repairing a chafed stern line. The crewmembers removed the stern line and set the old one aside. According to the plaintiff, he tripped over the stern line while the vessel was in heavy seas and high wind, injuring his ankle. He filed a claim under The Jones Act alleging that his captain gave him a dangerous order that he was required to follow and this led directly to his injury.

Legal precedent on the matter favors the plaintiff in these cases. According to the law, a seaman cannot be held contributorily negligent for following a direct order, even in cases where the seaman recognizes the danger. While some courts have interpreted the rule as barring any attempt to assign blame to an injured party following a direct order, other courts have applied different standards. In these cases, a seaman following a specific order cannot be assigned contributory negligence. However, seamen assigned a general order can be assigned contributory negligence, if he was negligent in carrying out the order. It is unclear whether setting the damaged line aside and leaving it on deck was part of the order or whether the seaman made the decision of what to do with the damaged line. Specific orders require duties to be performed in an exact way leaving seamen with no discretion in how to carry out the order as specified.

Essentially, the appellate court found that the individual who issued the order gave a general order to replace the stern line. While the weather was inclement at the time of the order, the seaman was negligent in placing the old stern line in a place where he could reasonably foresee it causing a tripping hazard. Since he is the one who placed the stern line in a dangerous location and was not directed to place the stern line in that location by a superior, the court ruled that a finding of contributory negligence was appropriate in this case.

If you’ve been injured aboard a vessel, either as a crew member or a passenger, the Miami admiralty & maritime lawyers at the office of Michael F. Guilford can help you recover damages related to your injuries. Call today to schedule a free consultation and we can discuss your options immediately.