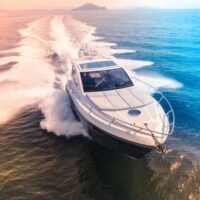 If you go to Boston Harbor, you can check out the high-speed boat attraction, Codzilla operated by Boston Harbor Cruises. The tour operates a high-speed boat, ostensibly at high speeds, thrilling guests with its fast moving. However, one woman is less than thrilled by Codzilla after she says the boat raced by her own boat creating a massive wake that shot her up into the air and caused severe spinal injuries, according to a recent lawsuit. She is suing Boston Harbor Cruises for an unspecified amount of damages related to medical expenses and decreased quality of life relating to her accident.

An attorney for the woman admits that Codzilla is supposed to perform at excessive speeds for the purpose of thrilling riders, but that the maneuvers performed that day did not account for other boaters in the area and created an unreasonable and unpredictable risk of injury to other boaters. The plaintiff and her husband were on a 16-foot whaler when the incident occurred. The complaint says that she landed on her back and shattered her tailbone, requiring several surgeries.

The boat operator of the excursion tour is likely liable for causing injury to other boaters, but the cruise line will almost certainly attempt to lay the blame with the injured boaters. Thus, the question will come down to who had the right to be where at the time of the accident. Jurors will probably figure that the company operating the dangerous speedboat had the duty of care to ensure there were no other boaters in their vicinity while they were operating tours. It would not make sense to mix high speed boat rides with everyday boaters in the same areas, so the question as to why that was allowed to happen is another matter entirely. Obviously, accidents involving these types of tours are predictable and the duty of care would fall on the company to prevent such incidents from occurring. However, we can’t be certain that the injured boaters weren’t somewhere they were not supposed to be when the accident occurred. We have yet to hear Boston Harbor’s response to the allegations yet.

If the boat is capable of creating a wake large enough to propel other boaters into the air, then signs should be posted with warnings, and the boat operator should perform a lockout to ensure that other boats are not placed in danger. Given all these factors, an injury caused by the boat ride is predictable, and thus, liability would fall on the boat operator unless the boaters were doing something they were not supposed to do.

Talk to a Miami Cruise Ship and Maritime Attorney Today