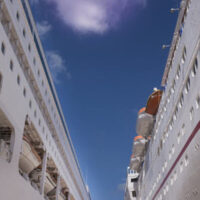 Essentially, the cruise company was more interested in protecting itself from liability than ensuring the safety of its guests, according to the plaintiffs. The floatplane slammed into the side of a mountain while touring Misty Fjords National Monument. The weather was bad according to the plaintiffs, but the cruise line pressured the excursion contractor into making the flight anyway resulting in six deaths.

An investigation of the crash revealed that pilot error accounted for the primary reason the plane crashed. The plane struck a buoy on takeoff and then flipped. An FAA investigation blamed the pilot for acting carelessly.

Part of the problem here was the Misty Fjords. Cloud cover in the area is extraordinarily low. The mist and fog often cling to cliffs making the mountaintops quite difficult to see. The pilot flew the plane into a mountain as he was attempting to get the passengers back to meet a 4 pm deadline for departure. The excursion package is part of the overall cruise marketing materials. However, the cruise line failed to warn passengers about the dangers of these excursions and made the problem worse by putting their itinerary ahead of their passengers’ safety.

What does the NTSB say?

The National Transportation Safety Board investigates these accidents and while they tend to take their sweet doing so, their investigations are meticulous and often represent the final independent word on the matter. The NTSB has expressed concern over the relationship between cruise lines and excursion operators as the excursion operators are under considerable pressure to meet the cruise line’s timetable. Further, between 2008 and 2019, floatplane excursions resulted in 207 crashes accounting for 80 fatalities, so it’s not like the cruise line can say that they were blindsided by the fatal accident.

In this case, the cruise line created a perfect storm of variables that led to the death of these passengers. You have a low-flying plane, headed into low-visibility conditions, with plenty of mountaintops, and the pilot has to meet a schedule. This resulted in an avoidable crash and the liability is going to fall on the cruise line for those deaths. In its final report, the NTSB said that scheduling pressures forced the pilot to take the plane out in poor weather conditions.

Miami admiralty & maritime lawyer Michael F. Guilford files lawsuits on behalf of plaintiffs that were injured aboard cruise ships. Call today to schedule a free consultation and learn more about how we can help.