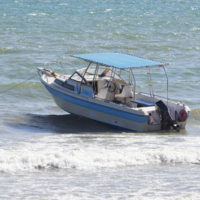 According to CBS Miami, a recent weekend was one of the worst ever in South Florida’s history of boating accidents. One person was killed while 12 other people were injured in multiple accidents. The most serious and tragic incident involved the death of one victim during an airboat accident, which, like all of the other incidents, is still under investigation. Multiple people were sent to the hospital in a separate collision that occurred near Miami’s Normandy Shores when a boat with nine passengers crashed into a dock. The collision occurred with such force that it caused the hardtop of the boat to fully break off,.  As a result  three people were sent to the hospital in serious condition and one person was sent to the emergency room in critical condition. The operator apparently lost control, which, of course, is not an excuse that would absolve him or her from liability during a personal injury lawsuit. Multiple other crashes involved personal watercraft in which three people were hurt, and four others were sent overboard when their boat capsized off of Turkey Point.

“Keep Your Head on a Swivel”

According to Alberto Maza of the Florida Fish and Wildlife service, “We’re getting into summer. We are proponents of wearing your life jackets. Do a 360 scan, keep your head on a swivel always looking around at all times when you are out on the water.” The mayhem this summer caused by intoxication, inexperience, distraction, and excessive speed will undoubtedly cause many more serious accidents in which lives are lost and serious bodily injury occurs.

Florida experienced 737 boating accidents in 2015, which was 104 more than in 2014. Just about half of all of those accidents were collisions, and the most common causes of collisions were inattention and failing to maintain a proper look-out, according to the Florida Fish and Wildlife Conservation Commission. Boat and all other water vessel operators have a legal responsibility to constantly scan in all directions to ensure that they do not hit a swimmer, boat, jet skier, log, dock, rocks, buoys, piers, debris, or anything else that would cause a collision or capsize. They may employ the assistance of another person, radio, and radar in order to accomplish this. Simply “not seeing” something like a swimmer or another boat approaching from an angle is not an excuse that an operator can make to excuse themselves from legal liability. Like 2015, 2016 was also a bad year in terms of boating accidents. The upward trend will likely continue throughout 2017 as the population of Florida increases and more and more distracted and inexperienced boaters make their way to Florida’s waterways.

For assistance today regarding any maritime accident, injury, or death, we urge you to call the Law Offices of Michael F. Guilford, P.A. in Miami at 305-359-1999 today. We will work tirelessly to ensure that you are compensated for the full extent of your injuries and other damages.