Carnival Cruise Ships Ram One Another in Mexico 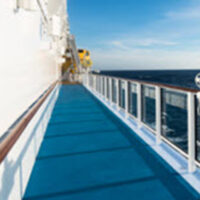 One piece of news that was heavily circulated this holiday season was the sad tale of one Carnival cruise ship ramming another off the coast of Mexico. According to Carnival Cruises, there were only a handful of minor injuries related to the collision and it appears that everything was treatable by onboard doctors. Only six guests presented themselves to the infirmary for medical evaluation.

According to reports, the Carnival ship Glory was attempting to dock when it somehow struck the Legend, another massive Carnival cruise ship. Pictures show one of the decks of the Legend badly damaged, but Carnival insists that the seaworthiness of both vessels remained intact after the accident.

At first, there was only one reported injury to a passenger in the dining room. Indeed, the dining room is going to be one of the least safe places aboard the vessel in the event of a collision. Tables, glasses, dishes, and hot food would have likely been destabilized resulting in major spillage. The fact that no one was badly injured in the collision is a holiday miracle.

Will Lawsuits Emerge From This Event?

It’s definitely possible, but there is definitely a threshold for injury when it comes to filing a lawsuit. In cases where you have minor bumps and bruises, scrapes, or basic lacerations, it may not be worth the effort it takes to pursue a lawsuit.

Those who are seriously injured, on the other hand, should file lawsuits. Why? Well, they are likely accruing major medical expenses, missing time from work, or are suffering a major reduction to their quality of life for an extended period of time or sometimes, for the rest of their lives.

How serious would an injury have to be before someone should file a lawsuit? Well, that choice would depend on the individual circumstances of each party. For instance, let’s take as an example, an individual who was in their cabin at the time the collision occurred. This individual absorbs the collision as it hits by putting their arm to the wall to prevent them from going headfirst into an immovable object. The feel a sharp twinge of pain, but it goes away after a while. Two weeks later, they’re working at their job and they notice the pain coming back. Over time, it becomes worse and worse and now they’re struggling to do the basic things required of them at work. In this case, they may have to miss time from work while an orthopedist took a look at the elbow and arm to make sure that they haven’t suffered damage to the ligaments or tendons in the arm. In this case, their injury not only required subsequent medical attention, but it also compromised their ability to do their job costing them either sick days, vacation time, or wages. That would be a situation where a relatively minor injury was not as minor as they initially believed.

If you’ve been injured aboard a cruise ship, call Miami admiralty & maritime lawyer Michael F. Guilford for a free consultation.