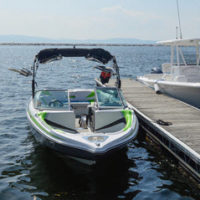 The deceased Miami Marlins baseball star Jose Fernandez was recently found to be at fault for a boating accident that took his life and the lives of his two passengers (Emilio Jesus Macias and Eduardo Rivero), according to Straits Times. The crash occurred in September of 2016 in Miami, at night, when the vessel went straight into a rocky jetty at approximately 65 miles per hour, according to the official accident investigation conducted by report the Florida Fish and Wildlife Conservation Commission. The report said, “Fernandez operated [the boat] with his normal faculties impaired, in a reckless manner, at an extremely high rate of speed, in the darkness of night, in an area with known navigational hazards. Fernandez’s impairment and manner of operation caused the accident which resulted in his death and the death of his occupants.” An autopsy revealed cocaine in his system and an illegal level of alcohol intoxication. As with driving a car, the legal limit for blood alcohol content (BAC) is 0.08. Anything at or above 0.08 is considered illegal when operating a water vessel. If Fernandez had survived, he could have been charged with the following felonies:

We understand that filing a personal injury lawsuit against a friend or family member could potentially ruin the relationship, but you should not be left alone to pay for your medical costs, lost wages, pain and suffering, or the immense emotional and financial costs associated with the death of your spouse or child.

As with most motor vehicle traffic collisions, human error is responsible for most boating accidents. The leading causes of boating accidents in Florida are operator inattention, intoxication, lack of a lookout, operator inexperience, and failure to provide adequate numbers of life jackets (or to wear a life jacket). When some people head out for a day of boating, they assume a laidback demeanor as if they are suddenly on vacation. While they might be, the operator of every water vessel has a duty to remain vigilant, responsible, and follow the law. A moment of distraction, a few too many drinks, and not being prepared for the elements or the event of a capsize can lead to severe injuries and deaths. Even reading the weather incorrectly can lead to a cascading disaster where more and more things go wrong. An experienced and responsible boater knows when it is a mistake to head out in unsafe conditions that could lead to an accident. The sea is much more unpredictable than the highway, and weather moves in faster over water and has a more drastic effect on a water vessel than it usually does to a passenger vehicle on dry land.

Reach out to the Law Offices of Michael F. Guilford, P.A. at 866-473-2636 today for legal assistance. Our Miami attorneys are prepared to aggressively advocate on your behalf.