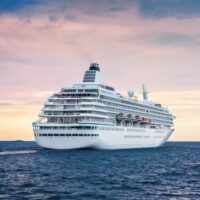 Florida just won a major battle against the CDC, one that Alaska also hopes to win to open up the cruise industry as quickly as possible. As the State of Florida claims victory in their fight to open up a multi-billion dollar industry that has been mothballed since March of last year, Royal Caribbean announced the postponement of their first cruise after several crew members turned up sick with COVID-19

While the numbers aren’t terrifying, only 8 of 1,400 crew members fell ill with the virus. Of the 8 none of them were fully vaccinated. Royal Caribbean says that this will delay their inaugural sailing until the end of July. The ship was to set sail July 3rd.

The first cruise ship to set sail after the pandemic started, Royal Caribbean’s Celebrity Millenium, contributed two new cases of coronavirus. This was despite the fact that all passengers aboard the vessel were required to show proof of vaccination. Meanwhile, some states are passing legislation that prevents businesses from requiring vaccine passports or other types of proof of vaccination to enter premises. This could throw a wrench in CDC efforts to stop a resurgence of the virus or allow variants to mutate and develop. Florida is among the states that have passed legislation prohibiting businesses from requiring vaccine passports.

At the same time, cruise lines are still requiring customers to show proof of vaccines setting up a showdown in the courts. Florida won a major victory when a federal judge ruled that the CDC had overstepped its authority in demanding the mothballing of the cruise industry to remain in effect. Meanwhile, the State of Florida has cut the CDC off at the knees when attempting to enforce provisions that the cruise industry seems more than happy to abide by themselves. In fact, the cruise industry appears to be in open violation of Florida statutes while attempting to stay as close to CDC recommendations as humanly possible.

To be sure, the State of Florida thinks that all cruisers should sail at their own risk. This means that passengers will not be able to file suit against the cruise line for COVID-19 infection unless the passenger can show that they are not in “substantial compliance” with prevailing medical recommendations from medical authorities. But now that the State of Florida is undercutting those recommendations, it is more than likely that there is no standard at all for filing such lawsuits and passengers are simply on their own to fight the infection and roll the dice.

On the other hand, passengers still have the choice to get vaccinated prior to going on a cruise. This can only help you. The vaccine has shown remarkable efficacy for protecting against the primary strain and its variants. So regardless of what the State of Florida wants, if you plan to go on a cruise this summer, be sure you are vaccinated.

Miami admiralty & maritime lawyer Michael F. Guilford handles crew and passenger complaints that occur on the high seas. If you suffered injury due to negligence, call our Miami office today and schedule a free consultation. We can help.