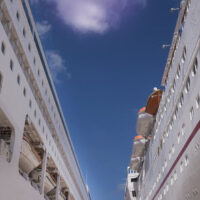 Okay, so this is a weird one. Actress Stephanie Hernandez boarded Royal Caribbean’s Mariner of the Seas to film a commercial pitching their latest attraction, the Sky Pad. The Sky Pad is a bungee/trampoline contraption that allows guests to perform backflips and twirl around without endangering themselves or others. However, Hernandez says that she herself was injured while on the Sky Pad.

Hernandez claims that she was strapped into the attraction with a harness that didn’t quite fit her properly and told to perform a series of jumps and backflips. By the time the shoot had finished, Hernandez complained of severe pain. She decided to see the onboard doctor.

Hernandez realized that she had suffered fractured ribs during the shoot and also complained of back problems. Hernandez has since filed a lawsuit against Royal Caribbean for the injuries she suffered. She alleges that the attraction is unsafe and that no one warned her about the potential dangers of the Sky Pad.

An attorney for Hernandez alleges that the cruise line employees who are tasked with operating the Sky Pad have not been properly trained. Additionally, he claims that the equipment they are using caused her injury.

The Sky Pad has been around since 2018 and Hernandez is by no means the only person who claims to have been injured by the attraction. In one case, a passenger was hurled 20 feet to the ground after one of the bungee straps broke. His lawsuit seeks $10 million in damages. The passenger broke his pelvis and dislocated his shoulder. That case is pending, but Royal Caribbean took the attraction out of service ostensibly to ensure that no more guests were injured.

The commercial was designed to spread awareness about the ride and produce a buzz around it, but the buzz it’s managed to produce is not the one the cruise line was hoping for. Instead, it is a second high-profile lawsuit targeting Royal Caribbean concerning that specific ride.

The biggest issue may be that such an attraction is not designed to be enjoyed on a moving ship.

Damages in the Hernandez Lawsuit

Hernandez is entitled to be compensated for her medical expenses and pain and suffering damages, but she will still need to show that her ribs were injured as a direct result of the ride and not some underlying condition. For instance, if Hernandez suffers from an undiagnosed brittle bone disorder or some other condition that renders her more prone to suffer injuries of this sort, then Royal Caribbean will argue that her injuries in this instance were not foreseeable and that they are thus not liable.

If you’ve been injured on a cruise ship or pleasure craft, Miami admiralty & maritime lawyer Michael F. Guilford can help you recover damages for your injuries. We handle both passenger and crew lawsuits and have won significant sums for our clients in the past. Talk to us today for a free consultation.